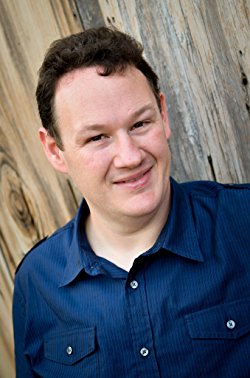 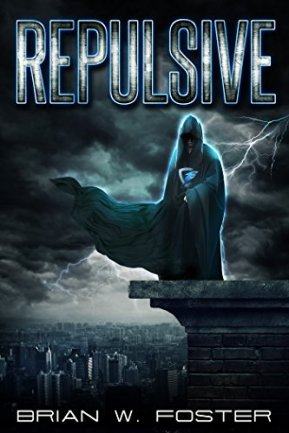 Last night, I finished reading Repulsive by Brian W. Foster. I regulated my reading of this book to the evenings before bed and this superhero tale kept me up more than a few nights of eager entertainment. I love the robe, and the fact that you can’t see the hero’s face due to his power, which causes some to be physically ill. I actually fell in line with the troubles and intrapersonal turmoil of the characters. I wanted to help them, I was engaged.

Zack Zurick loves superheroes. Lives them. Knows everything about them. And hey, he is a classic underdog and has an alliterative name, so maybe he could one day be chosen to join their ranks.

His life drastically changes when he becomes Repulsor. He’d hoped the fame and money would make Hayli see him as more than a friend. Instead, she can’t even look at him without literally getting sick. And the whole saving-the-world thing turns out to be harder than he thought, too. The villains have teamed up, and the heroes have a traitor in their midst. Zack must figure out who’s betraying them, defeat the bad guys, and, oh yeah, not get killed.

Right. Why not just go ahead and win the girl while he’s at it?

Maybe he could. If she weren’t dating the most popular, most famous, and most handsome superhero of them all. And if only he weren’t … Repulsive.

Ok, so the description is less than stellar but I am not familiar with marketing in this genre so I do not know the expectations of presentation. I peered into this book anyway and was hooked.

The origin story of this character was great, and I was impressed with Foster’s detail when describing the hero’s superpowers. The personality is kind of like Peter Parker in high school but we don’t stay in that environment long. Zach’s powers are unique and Foster offers enough believable explanation for the reader to understand as far as the physics go. For all I know, the writer knows what he is talking about.

The fight scenes in this book were awesome. Not too much, not too little, and the timeframe between action verses drama was balanced. I had a feeling that the author was the dungeon master, and the way he allowed the action scenes to take place was almost turn based.

I did like the ending, but I didn’t like the Epilogue. I could use 3 whole books with Repulsor finding his way instead of introducing the new (and then again, not new) character but I do understand why the author made HIS decision and where he could be going with the opposite archetype.

Writing: Smooth and easy. The author’s go to words bothered me by the end, the ever present “crap” and “freaking” and I could use better character names besides “Bob” and “Amber” but oh well.

This would be good among late-teens and anyone who likes visual, movie like descriptions and action, a staple in the genre. I identified with the main character and his silly jokes.

I do recommend that anyone reading this checks out the short prequel Repulsive Origins – The Captain: A Short Story either before or after. In my case, after. This gave a lot more info on how the superheroes are made.

I would like to see Repulsor and would, more importantly, buy more Repulsor books if I could watch him turn from squeamish boy hero to seasoned pro. We caught a glimpse of this character growth with every battle and I want to see him as a man.

I will also be willing to read more by Brian W. Foster and more from this genre as it is intriguing.

On the internet at http://www.authorbrianwfoster.com

One thought on “Book Review: Repulsive by Brian W. Foster”